I have been using Google Adwords for a number of years and one thing that I know for sure is that nothing is absolutely clear cut; advertisers are given enough data to understand 90% of what is going on and to persuade us (much of the time) to spend a bit more money. As we do not have full access to all of the information on the auction such as the number of other bidders and what exactly the others are bidding as well as what the quality score of the others is it becomes a psychological game where we are always trying to second guess the behaviour of our competitors.

If sales on a popular product drop one day then we will start looking at how our prices vary with our competitors, how our traffic to that product has changed, what are our impressions and clicks? what is our ad position compared to normal, what is our average CPC compared to normal etc etc. Sometimes an answer can be deciphered through all of these checks and sometimes nothing logical is thrown up so we have to make a best guess and act. Bid up or weather the storm.

I have on a number of occasions questioned to myself how efficient Google’s discounter rule is; they are a business with a strange morality and I believe an arrogant disregard for their advertising customers (although they have the highest regard for their end users) which has led me to conjure up all kinds of fantastic theories of profiteering on their part. Are Google arrogant to the point that they believe that they can decide what is and isn’t right/wrong. However It would be unbelievable if the Google Adwords discounter did not actually work as it is described on their site as they have a fantastic and genius business model as it is, so completely unnecessary to risk it through greed.

If you do not know what i am talking about then in a nutshell the discounter promises to only make you pay 1 cent (or 1 pence) more than the next highest bidder in order to beat them in the auction; assuming all other things are equal i.e. that you have the same quality score. If you bid 50p and your competitor is bidding 44p then you only need to pay 45p per click in order to show above them in the search results and Google will only charge you 45p when a user does click on your ad in the higher position.

On many occassions since I started using Adwords I have grown suspicious of the discounter as it just hasn’t seemed plausible based on actual experiences; but as my gut feeling is not empirical I decided to put this theory to the test. I have a client (that will remain nameless) but they operate in a market where there are consistently high CPC’s.

Early this year I was bidding £17 or £18 for position 1.1 to 1.5 and paying approximately £15 average CPC. With clicks often being 20 per day I decided that this was too much and that we should test the effect of bidding down a little over a few weeks/months to see what would happen to the CPC that we paid as well as to the average position and traffic. The plan was that this would give us more budget to focus elsewhere if it worked. The clients account is split into morning campaigns and afternoon campaigns which allowed me the chance to have a secondary check on this test to improve reliability.

The test was only on a small number of keywords and the data that i will share just follows the most important generic Exact match keyword to this client in both a morning and an afternoon campaign. I collected a daily keyword report every day for 6 months so that I could see all changes in quality score as well as all other factors. On all Google reports that run over a long time frame the quality score column data is always just the latest quality score and the max CPC just shows you the latest max CPC bid. So it was a bloody hassle to do this. Firstly; the bidding changes:

The below image shows that even though we bid down consistently over a period of 3 months the impressions and clicks increased for the keyword. This image is aggregated for both the morning and afternoon as i made all changes on the same days and at the same times. Please note that the bidding changes began in late January whereas the graph picks up data from the beginning of November 2010 as I wanted to be able to see general patterns before and after as well as during the trial. Obviously the bidding changes did not have the expected effect; I reduced the bids by nearly cutting them in half on the 26th January and as you can see below nothing significant happened to impressions and clicks; they were already on an ascent and that ascent just continued. This just means that there was an upwards trend in the market for this keyword but that a massive bid change did not effect any change in our performance. This is surprising as more impressions and clicks would probably cause more players to compete harder for them through bidding up, although there is probably a delay in a market trend and the causal bidding behaviour of a month or so. 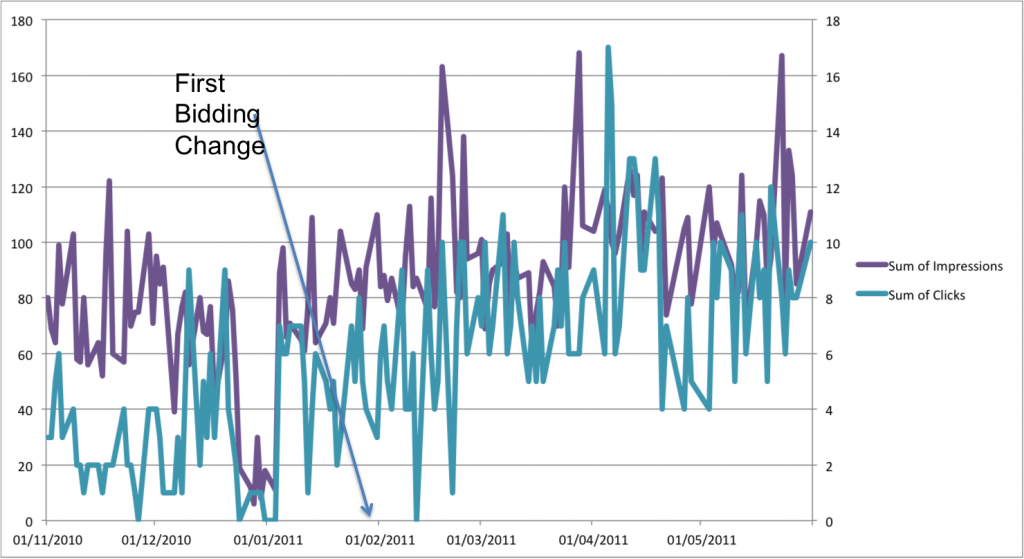 Now, this data seemed to back up my conspiracy theories on Google’s faults with the auction data, but as you can see below the average CPC was already on a decline when I first bid down on January 26th. However, the graph does show that from January 28th to the end of February that although we had bid down massively that as well as the clicks and impressions increasing the average CPC fell and we gained in position (remember the position axis is inverse i.e. the higher up the axis the lower the position on the SERPs page). Looking at this I was certain that something odd was up. However, once I bid down again on March 4th then the position began falling, but slowly. This data was solely for the morning keyword so I then added in the data for the afternoon.

As you can see below the afternoon story was the same between January 26th and March 1st; I bid down massively and maintained position, lowered CPC’s and at the same time gained clicks and impressions so either the discounter was not working as Google suggest or at the same time that i bid down many competitors also bid down. However, on both the morning and afternoon campaigns after I continued my bidding down efforts into March things started to change; obviously average CPC’s continued to fall but I also started to lose position which suggests that the Adwords discounter was working efficiently. 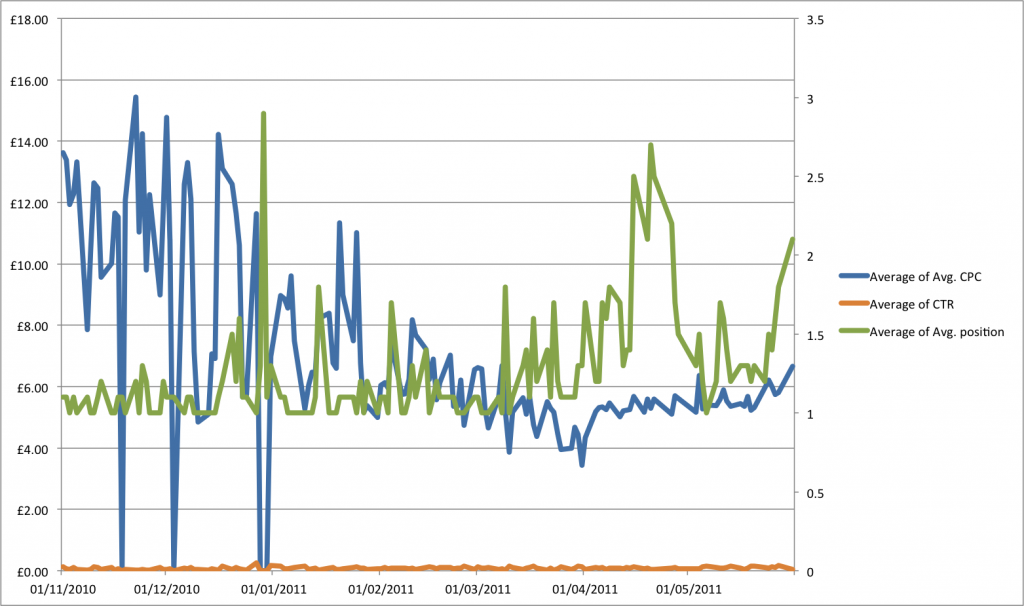 Finally, I looked at the average position vs the click through rate. This was interesting as for this keyword we increased click through rate over the whole period even though we saw our position climb from 1.7 to 1.2 between November 1st and mid January (this was when we were bidding up). However, when we started bidding down the click through rate still improved even as we lost position after March 4th. All I can put this down to is the changes in ad copy that I was making over the same period.

In conclusion the results are surprising as definitely the data shows that although we bid down heavily we didn’t (at least for 1 month) lose position and at the same time we started paying a lot less in CPC’s. I cannot say from this that the Adwords discounter does not work; there are too many external factors at play with competitor and user behaviour but what i did learn from this was that pushing and pushing for position 1.1 in order to maximise impressions and clicks does not always work as you would expect for every keyword and seems to come at a cost that is not consistent with the benefits. I also learned that there are significant ROI gains to be had from experimenting with bid and position for every keyword and not to be lazy and rely on what is written as a general rule; things do vary from the norm quite a lot of the time.