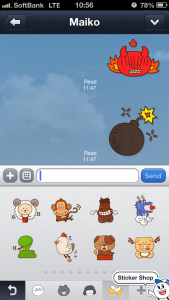 This is a bit of a diversion from my usual posts on practical PPC or SEO to something more newsy – as I spend a lot of time in Japan I thought it would be interesting for you all;- please let me know what you think?

I was in a meeting with a client in Tokyo last week and we were discussing the growth of social network sites and he started talking about a site called “Line”.

After a couple of minutes I had to stop him and ask what he was talking about.

He started laughing as I was perhaps the last person in Japan to hear about the fastest growing social network ever (in Asia).

Line began in the aftermath of the 2011 earthquake when all telecoms providers collapsed and communication was lost. At that time I was teaching a lesson in a Japanese primary school and no-one could contact anyone – land lines and mobiles all down. However, I could call my dad through Skype.

Developers at the Japanese arm of the large Korean search engine Naver (NHN Japan) recognized this as a serious issue/opportunity and quickly put together the bones of Line.

The network launched on 27th June 2011 and within 1 year had 45 million users, 20 million of which were in Japan. Last week Line hit the milestone of 100 million users worldwide with the vast majority shared between Japan and Korea, dwarfing the other big players, Facebook, Mixi, Gree and Twitter. They are claiming around 3 million new registered users each week.

There are 10 million users in both Thailand and Taiwan and it is fast becoming popular in South America and Eastern Europe.

The network is more than just online text now though – you can also make free calls through Wi-Fi or if you are on a flat rate plan to any contacts on your phone who are Line users and there is a timeline that pulls in group communication abilities.

Line requires a unique telephone number for every user, although registered users can now download a desktop version of the app too.

The great thing about it being tied to a unique telephone number is that when you log in to Line it automatically scans all of your contacts numbers to check who is on Line at that time. You can then message them, have group chats and call directly. You are instantly connected to all of your important contacts, this is something that no other social network has achieved.

With the title of the post I am not just trying to get attention, the growth of this network is one signal that it is set for good things, but more than that I have always felt that the social site which will beat Facebook to the number one spot will need to be very different, Google+ has some fantastic features but it is not different enough whereas Line, being 1) Focused for mobile devices and 2) Requiring a unique telephone number, has capabilities that are just out of reach for Facebook, Twitter, Google or most other networks.

If you have not yet used it then you will be laughing at my naivety at this point. Well, we will see.

When you join, Line scans your friends of friends to suggest people to add as contacts on Line. You can add in all your friends from Facebook and instantly marry up with your contacts based on telephone number – quickly everyone is nicely tied up. As the vast majority of the population are now using Line in Japan, text messaging and calling have essentially become free for many people. Although most people are actually on unlimited data plans for texts anyway, the calls cost a fair whack in Japan so there is a financial incentive to use the network too.

What is Line’s business model? 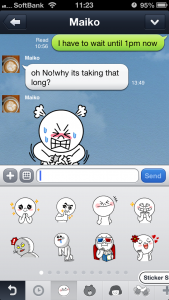 With the user base they have there will be a number of opportunities and it seems that this is still being figured out but one of the key aspects of Line is that there are a wicked range of “stickers” or emoji that you can send. Stickers are elaborate emoticons and there are thousands of them available.

Line allows brands to upload branded stamps that users can purchase for a dollar or two. This may be an aspect that is unique to Asia but they are incredibly popular and consumers are happy to shell out to send Doraemon or Crayon Shinchan stamps to their friends.

There are Line business accounts, which unlike Facebook or Twitter require a joining fee and then a monthly subscription fee.
With a business account you are able to sell stickers, send messages to your contacts, distribute coupons and run competitions.

Lawson, who are a large chain of convenience stores in Japan messaged their 1.5 million contacts through Line in August 2012 with a coupon offer and 1 million of the recipients redeemed in store!

There are also “Official Accounts” which allow users to communicate directly with famous figures that are on Line.

The timeline allows you to share updates with all contacts in a similar approach to the Facebook network.

There is also a Line photo application and many games within the app.

Line can be downloaded in the App store on all popular smart phone platforms and is available in Japanese, English, Chinese and Spanish.

3 thoughts on “Line – the social network that will topple Facebook?”